Are you new to blogging, and do you want step-by-step guidance on how to publish and grow your blog? Learn more about our new Blogging for Beginners course and get 50% off through December 10th.

WordPress.com is excited to announce our newest offering: a course just for beginning bloggers where you’ll learn everything you need to know about blogging from the most trusted experts in the industry. We have helped millions of blogs get up and running, we know what works, and we want you to to know everything we know. This course provides all the fundamental skills and inspiration you need to get your blog started, an interactive community forum, and content updated annually.

It was during one of our weekend ride at the base of Tikona fort when our friend Kedar Gogate suggested riding to Pachgani without using the highway. Avinash and I immediately jumped on the idea and the planning began.

Kedar had already done a part of route, which was Pune – Bhor – Mandhar Devi Ghat – Wai – Pachgani. But this time, he proposed to do even Pune – Bhor route using inner roads. The distance would be more, but we knew it would be very beautiful. The whole road would go along the Bhatghar dam water. The rough plan was to Leave Friday afternoon and reach Rajgad Base via Pabhe ghat and then proceed to Pachgani next day. On paper, it seemed doable. Roughly, it was 50KM on day 1 and about 100KM day 2. Having done few century rides in past, 100 KM was not a scary figure anymore. But the route had something unexpected to offer to us.

On Friday, I left home at 3:30PM and met Kedar at Sinhagad junction and we proceeded to Khadakwasla Dam where Avinash joined us. We started from Khadakwasla Dam at 5:30PM. It was a bit late than we planned. So, by the time we would reach Pabe ghat road, sun had set. Riding the Pabe Ghat at night was a bit risky, but when Kedar is with us, we hardly worry about any risks. Its up-to him to worry about our well being. The road was infested with pot holes and the tiny winy light that our torch yielded was barely enough to wade through the pot holes. I started considering an occasional pass by a car or two wheeler as blessing. It would temporarily provide more visibility.

As the climb to Pabe ghat started, I started falling behind Kedar and Avinash. But I didn’t regret it. The whole road was for me. The whole atmosphere was filled with an aroma of rice crop. Some temple in a distant village had a loud speaker running. But fortunately, instead of playing Sairat songs, it was airing the live Bhajans sung by locals. I tuned my pedaling to the tune of the Bhajan and continued the climb. But the last four kilometers of Pabe Ghat is very steep. I was already in the lowest possible gears, but could not generate enough torque. The weight of my luggage and the potholes also started making it difficult to ride and I started having difficulty maintaining the balance. So, finally I decided to climb down and push my cycle.

I have done Pabe ghat in the past so I knew exactly how much I had to go before I reached the top. It helped me keep calm and keep pushing the bike. I sent a message to Kedar and Avinash through a passing two wheeler rider not to worry and I am coming at a slow pace. After pushing the bike for 15-20 minutes, The slope grade became better and I rode to the top. Kedar and Avinash had reached 15 minutes earlier. So, after taking a bit of rest, we proceeded to climb down. If climbing up was difficult, climbing down was another challenge. Due to the low visibility and potholes, throughout the climb, we had applied breaks to control speed.

Avinash had booked a cottage at “Kamalini Kutir” near Rajgad base. We reached the place at 8:30PM. This is a very good, clean resort and food is very good. It was a delight to eat simple Bhakri, Pithla, Methi Sabji and Gulab Jamoon after a 58KM of ride.

Today was going to be all climbs. Our first challenge was to pass Khariv pass. The road condition was pretty good. The passing by villagers looked at us wondering what these crazy people are upto. We kept asking folks how far Bhor was from. One guy said it would be 60 KM. We got worried. After 10 minutes, we passed another person. He said 40KM. So, in 10 minutes we had crossed 20KM 🙂 One person had an interesting answer. He said, the Bus would charge Rs. 40 Ticket. So it was now upto us to figure out the distance. Anyways, we continued pedaling without worrying about the distance.

As we started the descent, Avinash had a flat tyre. Thanks to Kedar, we quickly replaced the tube and proceeded further. It was a beautiful road. Rajgad on our left and Torna on our right.

After Khariv Pass came another pass called Pali Pass. This road goes between Rajgad and Torna. The climb was not that bad. We descended from Pali pass to a village called Bhutondi. From here, you take a left to go to Bhor. This road was a worst nightmare. Actually, there was no road. It was full of packed stones with many loose stones threatening to knock you off of your seat. Few passer by villagers were giving us assurance that the road would improve further down. It was a delight to get back on the tar road.

Now, the landscape changed too. The road goes along the Bhatghar dam backwater. The scenery was extremely beautiful. But the terrain was funny. One moment you are happily coasting along the descent and the other moment, a steep climb would force you to get to the lower gears. This roller coaster ride seemed never ending. I must admit, the Government really cares for the nature. They have kept the nature here untouched by not improving the roads!

Meanwhile, Kedar met a local school teacher. He was very helpful. He informed that Bhor was 37KM further and the road condition wasn’t good further down. He suggested that 5 KM ahead, we would get a boat to cross the dam. The road on the other side was better. On top of that, we would save around 10-12 KM of distance. This idea appealed to us. Not only would it save us effort, but the idea of travelling in a boat was nice. 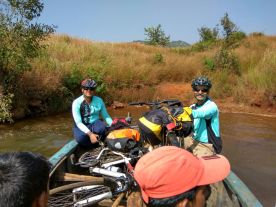 In mere sixty rupees, the boatman helped us cross the backwaters. With the rest, we also felt refreshed and charged towards Bhor.

We reached Bhor at around 1:30PM. Had a nice homely Maharashtrian rice plate at this restaurant called Dhadfale Rice plate. A simple fare with Shreekhand and ample of buttermilk.

At 2:30 PM, we proceeded towards Madhardevi Ghat. The sun was above us. The treeline was receding. But fortunately, it was not very hot. The road condition was very good. We kept peddling. As usual, I soon lost sight of Kedar and Avinash. My pace on uphill is terribly slow. But I enjoyed pedaling alone.By around 4:45PM, I reached the top. Avinash was waiting for me over there. Avinash and my wife had reached Wai by car. They were to meet us at Pachgani so that we could bring cycles back on the car next day. So, Kedar had already left for Wai to hand them over the keys of his house.

Madhardevi top to Wai was a bliss for me. For 10 KM, no pedaling and just coasting down. I had reached the top speed of 47KM. In Wai, I met Kedar at the start of Pasarni Ghat. Avinash joined us in 10 minutes and we started our last climb of the day.

The climb to Pachgani was not that tough. But we had already done 90 KM of ups and downs. Kedar never gets tired. Avinash also seemed ok. But I was a bit exhausted. So, I kept pedaling slow but steady.Since it was dark and lots of cars were passing us, Kedar and Avinash decided to keep me in their sight.

Finally, we reached Kedar’s nice home at Pachgani at around 9:00PM. It was the most treacherous ride. On day 2, we traveled 108KM and climbed approximately 3000 meters. 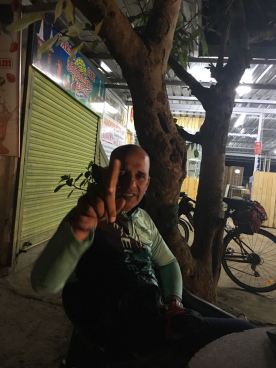 We need one more such ride!

Yes they did it! 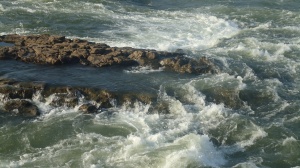 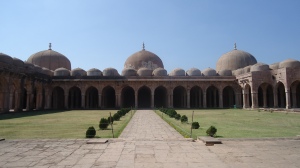 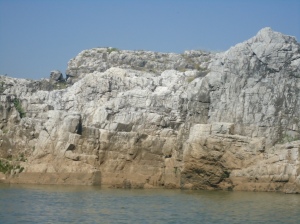 सुकामेवा
Create a free website or blog at WordPress.com.